Dancing Queen, released in 1976, became ABBA's biggest commercial hit worldwide and arguably their creative high point. Written by  Benny and Bjorn (with lyrical assistance from manager/producer Stig Anderson), the song was an attempt at emulating early American disco music and applied Phil Spector's famous Wall Of Sound technique to the arrangement and production (the song was also produced by Benny and Bjorn).

The lead vocals were performed in unison by Agnetha and Anni-Frid. During the recording sessions for the song, Benny brought home the backing track to Anni-Frid, who began crying when she heard it.

She has said, "I found the song so beautiful. It's one of those songs that goes straight to your heart." Agnetha has reflected in later years that, "It is often difficult to know what will be a hit. The exception was Dancing Queen. We all knew that was going to be massive".

It was officially released in the summer of 1976 as the lead single from their fourth album, Arrival, and instantly became a massive worldwide hit. It was their first and only number one in America and topped the charts in fourteen other countries, as well as reaching the top five in many others.

The song sold three million copies and has gone on to become one the most enduring and loved pop songs of all time. In 2000, Dancing Queen was voted 4th on Channel 4’s television poll of 100 Greatest Number One Singles. 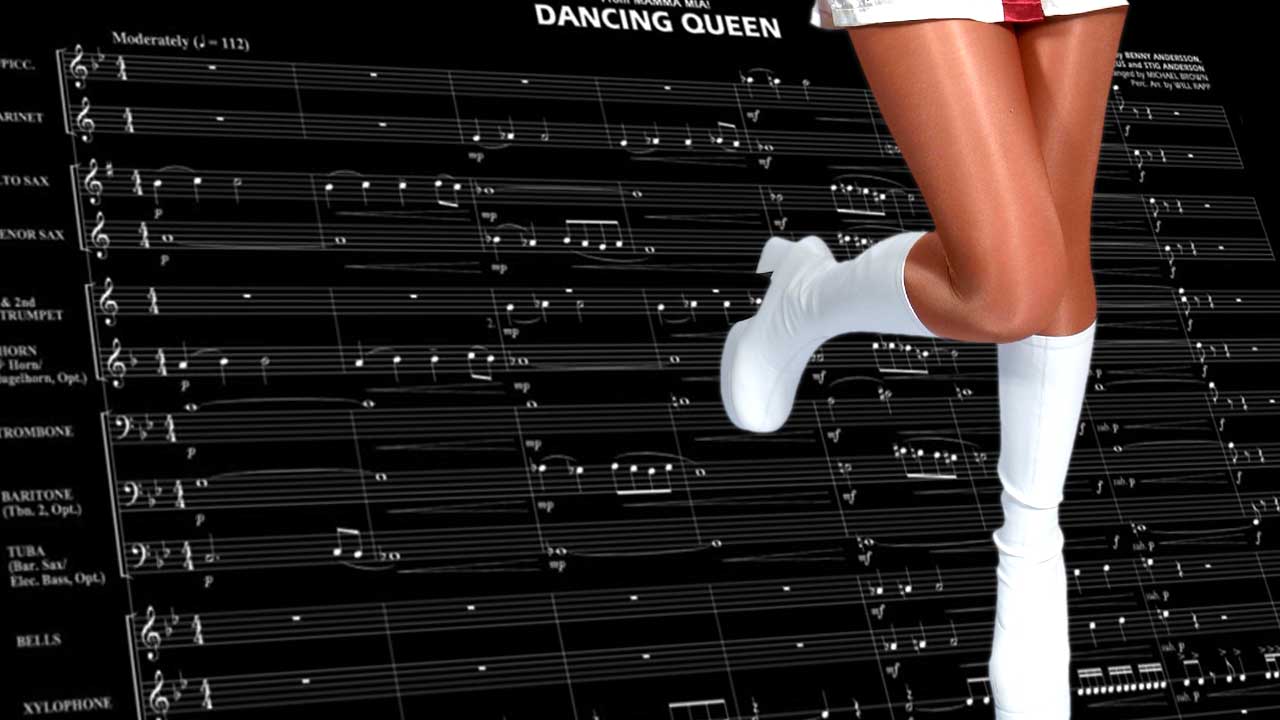 There are a number of things about the music of Dancing Queen that make it unusual for a standard hit pop song. The music of the chorus serves as the song's introduction and very unusually, the second part of the chorus ("You can dance, you can jive...") is where the lead vocals enter.

Lyrically, the songs captures the joyful ebullience of youthful freedom and the euphoric feelings that dancing can bring. The first verse sets the scene, with the song's female main character looking for a good time on a Friday night. The whole point of dancing in public is, of course, a courtship ritual to find someone desirable of the opposite gender, which is captured by the line: "You come to look for a king".

The song's melody is cleverly structured so that the vocal register is relatively low on the verses, as well as the chord structure relatively much simpler than the chorus. Another unique feature is the bridge to the chorus; most bridges last four or sometimes eight bars, here the bridge lasts only two ("And when you get the chance....").

The effect is a sweeping transition from verse to chorus which is further enhanced by the distinct change in vocal register and continues to rise with the ecstatic second half of the chorus: "You can dance, you can jive, having the time of your life...".

One more quirky fact that makes Dancing Queen unconventional is that it doesn't contain any cymbals (apart from hi-hats). Apparently, Benny and Bjorn found them messy to deal with in a mix and so would normally overdub them afterwards to maintain sonic control. In this case, it seems they decided against it, though this curious feature is shared with several other hits of theirs.

There are several notable instrumental touches that act as memorable, distinctive melodic hooks, as well as adding colour and nuance. The first that springs to mind is the staccato piano motif that has an almost Beethovian grandeur, first heard during the intro.

The swirling synth-string melody that follows the line first line of the verse also has classical overtones and the incredibly melodic, boundlessly bouncy bassline is simply the heart of the music - the force behind it's propulsive, infectious energy.

Overall, Dancing Queen has rightly become regarded as one of pop's great masterpieces, both as a song and a production. It captures the Andersson/Ulvaeus song writing partnership at the peak of their powers along with the inimitable vocal sound of Agnetha and Frida. Dancing Queen epitomizes the magic of ABBA and preserves it for future generations. A timeless classic.

A must see at the newly updated Official Dancing Queen video in all its 4K glory. The music has been remastered tool. We love it!

Next read: ❤ Revival Press Review 2
Back to contents