The front sleve design of The Visitors, ABBA’s final album, has been pored over as much as the lyrics as fans and analysts sought to explore the factors that brought this mighty group to a close.  The album was released in the same month that the divorce between Benny and Frida was made final (November 1981), bringing a sharp focus to splits and tensions between the band.

On previous album covers, the group members had been positioned carefully, especially on the last album Super Trouper with the band hemmed in by an adoring crowd. On The Visitors, the individual members may have been in the same room, but they were all very much in their own space. The four members were all at least looking in the same direction, but the feel of separation and finality (although no doubt aided with the benefit of hindsight) is written all over the album cover. 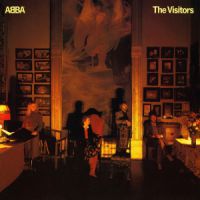 The cover was shot in the Atelje Studio. The backdrop of the room almost becomes the story due to the mood lighting and the spatial awareness between the different members. The front cover was shot in the Atelje Studio in Skansen Park in Stockholm. The painting of Eros by Julie Kronberg is as much of a draw as the band itself, who are all found in the shadows. ABBA had rarely taken a back-seat or stood in the shadows for anyone else in their career, but it was clear that this album was a step apart. The music was still as wonderfully crafted and melodically charming as any other ABBA record, but anyone hoping for bubbly and upbeat pop hits would be left wanting more. The members of ABBA were no longer that type of people, and the band was no longer that style of band, although it was still a critically acclaimed with a range of stylish and mature pop songs.

The front cover of The Visitors can invoke several sad and maybe even unpleasant memories for many fans, let alone the band, but it was the perfect cover for the times, and for the music. Recreating the joyous or positive nature of previous album covers would have jarred with the spirit and tone of the record, sending out a confusing signal for the record-buying public. This was a serious album, and the divisions between band members were clear to see.

It may have been easier for ABBA to try and keep their private lives separate and focus on the music at hand, but the band was too big for that to have occurred. There was huge interest in every movement of the group and Benny and Frida would never have been able to keep their separation and then their new adventures in love from the prying eyes of the press.

Political pressures impacted on the album as well - Of course, The Visitors was not solely about the breakdown of the relationship or the band, the early 1980s was a complicated and at times scary place. There were genuine fears of the Cold War escalating in something with disastrous consequences, and the dark lighting and foreboding mood of the cover are reflective of those times. All was not well with the world, or in ABBA’s world, and to have created a cover that would have suggested otherwise would have been wrong.

While there was never an official statement about the dissolution of the group, after The Visitors it was hard to see how the group could carry on. The album did post a very large sign-post to the future of Björn Ulvaeus and Benny Andersson though, with the song-writing duo moving into the world of musicals and grander statements. In this regard, there is a classical and theatrical feel to the album cover, all of the individual members playing their role and dealing with heartache and loss in their own way.

Although many people will return to the cheery and uplifting pop of previous albums, The Visitors remains the ABBA album with most substance and interest.

Next read: Costume - Waterloo
Back to contents